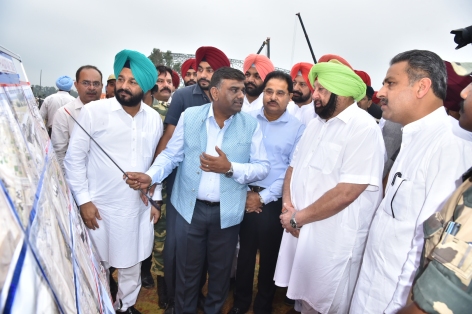 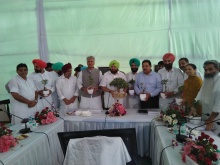 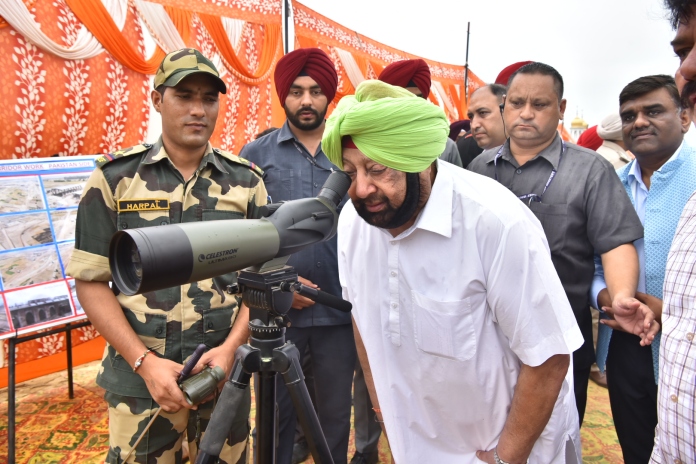 With less than two months to go for the historic 550th Prakash Purb of Sri Guru Nanak Dev ji, Punjab Chief Minister Captain Amarinder Singh on Thursday took stock of the ongoing construction work for the Kartarpur Corridor, while sanctioning ₹75.23 crores for widening and strengthening of the major roads leading to this iconic town.

The Chief Minister also approved ₹3.70 Crores for the construction of a Heritage Street and Food Street for the mega event, while issuing a series of directives to various departments for ensuring timely completion of all development works for the celebration.

Accompanied by his cabinet colleagues, the Chief Minister inspected the Kartarpur Corridor construction works at the Indo-Pak border here, including the Integrated Check Post (ICP) construction project, where he interacted with the construction workers. He was apprised about the upcoming passenger terminal at ICP, which would have total capacity of 5000 -10000 and would be fully equipped with ultra-modern facilities.

Captain Amarinder took the opportunity for a `darshan’ of Gurdwara Kartarpur Sahib, located across the border, with the help of binoculars.

Captain Amarinder disclosed that he had written to Union Minister Nitin Gadkari seeking the declaration of the Sultanpur Lodhi Beas Batala and Dera Baba Nanak road (which is to be named as Sri Guru Nanak Dev ji Marg) as a National Highway.

The Chief Minister also asked the Health Minister to finalise and put in place an elaborate healthcare plan, encompassing all emergency elements, for facilitation of millions of devotees expected to visit the city during the 550th birth anniversary celebrations of the first Sikh Guru.

Captain Amarinder directed the DGP to expedite the process of setting up a DSP office and police station building at Dera Baba Nanak, land for which had been provided by Cooperation and Jails Minister Sukhjinder Singh Randhawa. IG Border Range SPS Parmar apprised the Chief Minister about the detailed security plans for the main event. He informed the meeting that foolproof arrangements would be ensured without any inconvenience to the devotees.

In another directive, the Chief Minister asked the Principal Secretary Civil Aviation to take up the issue of special chartered flights from London and other European countries to Amritsar for facilitation of the devotees settled abroad. He also asked the concerned officials to take up with the Indian Railways the issue of increase in frequency of special trains to the city during the historic occasion.

Reviewing the status of the work connected with the requisite basic amenities, logistics and infrastructure works in the adjoining 12 villages, Captain Amarinder Singh directed officials to ensure timely arrangements to facilitate the millions of devotees expected to converge at the historic city for the historic event.

In the meeting, the CPSCM said though works to the tune of Rs 450 Crores had been initiated at Sultanpur Lodhi, Batala and Gurdaspur, it was necessary to keep in place a contingency plan to ensure that the devotees experience no problems during their visit. The official programme for the main event should also be released soon, he suggested.

The Chief Minister has also approved an additional Rs. 1.18 Crores for the extension of the park at Dera Baba Nanak, which which Rs. 127.31 Crores had been earlier proposed. He further sanctioned funds to the tune of Rs 18.21 Lakhs for the installation of heritage poles with LED lights at the park being constructed in the historic town.