The Government Senior Secondary school, Sandhra has emerged as a role model for all the schools of Hoshiarpur District i

n terms of top-notch management mechanism. Well decorated classrooms, neat and clean uniforms and campus, e-lab and other aspects make this school giving private ones a run for their money. Apart from this, it is the 1st Government school in the entire district which started providing mid-day meal to the students at dining tables. This practice has also been emulated by many other schools. The Principal of the school Mr. Tejinder Kumar is showing the way and awards the students of 12th standard securing 1st, 2nd and 3rd positions with Rs. 11,000 cash prize.

Mr. Tejinder Kumar credited teamwork for the development of the school and elaborated that owing to the hard work and dedication of the teachers the result often goes to 100 percent. He said that he has decided to donate the 4th part of his funds to the

school on his retirement. He further added that a trust would be formed and the maximum amount would be deposited in a dedicated fund with the help of Samaritans. The interest generated from the fund would be used for depositing the fees of the needy students while the whole fund of the trust would be spent on the development of the school. To make the school free from the burden of fees is his main motive. 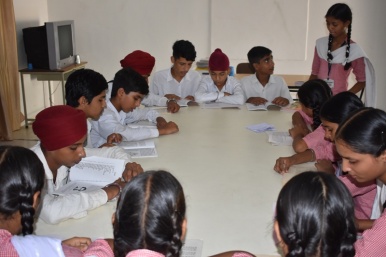 Mr. Tejinder Kumar further elaborated that a total of Rs. 6 and a half lakh have been spent till date on the all-round development of schools with the aid from Samaritans by forming a school welfare committee. A Sanitary Napkin vending machine for girl students has been installed and arrangements for an incinerator have also been made for its operation. An e-lab has also been established with air conditioner. Not only this but work is also in full swing to modernize the art and craft lab. The plan for a library with book bank is also in the pipeline where the students would get their syllabus as well as the competition books. A plan has also been chalked out for setting up a sports room in the school.

The Deputy Commissioner Mrs. Isha Kalia while appreciating the efforts of the Principal and school staff said that the persistent hard work of such teachers has been resulted in providing quality education to the students. She appealed to other schools to consider Sandhra school as a role model institution. She added that the entire staff of the Government schools should work together as a team so as to uplift the level of education in these schools. She further said that she would soon visit the schools showing good results.