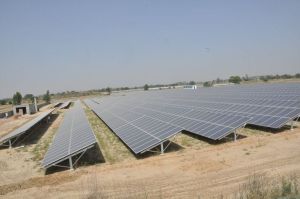 Inauguration of 10.50 MW Solar Power Plant in district Sangrur by Punjab New & Renewable Energy Minister Sardar Bikram Singh Majithia has made Punjab the first state in the nation to operationalize 117 MW solar power plants just within four months. With this, the state has now emerged as a dream destination for solar investors. This has only been possible due to the  investor friendly policies of the Government of Punjab.

The recent project has been set up on 45 acres of land using Rs. 84 crore. Besides this, a 100 MW project is expected to be set up in Mansa by March 2016 and capacity of 54 MW is to be added to the existing capacity of 34 MW at Fazilka. The major solar power developers including Lanco, Solairedirect and Acme are behind these projects. The state targets to achieve 1000MW solar power generation by March 2017.

As a matter of fact, within last three years record 208 MW capacity has been added to the existing solar power capacityusing huge investment of Rs. 1600 crore. It is apparent that Punjab is rapidly progressing in solar power generation becoming a torchbearer for the nation in this field. Country’s first satellite controlled Single Axis Tracking East West Tilt Technology based solar power plant came up at village Lalpur in Hoshiarpur district in May 2015. What made this plant special was the technology which worked by following sun’s path resulting in generation of eight percent more units of electricity than the traditional solar power plants.

One advantage of these projects is that farmers are now getting remunerative lease rates even for the lands that are infertile. Other than the existing projects in the state, it is highly expected that there will soon be more announcements for bigger solar projects. The government is emphasizing largely on environment friendly power generation technology. This will not only tackle the challenges of increasing global warming but also contribute in making the planet a better place to live. It will not be wrong say that the project will serve as a boon to existing as well as future generations.